In 2022, Australia has every reason to act on climate

As we step forward into 2022, the second year of the critical decade, here are some key moves Australia can make to catalyse climate action and ensure a strong, vibrant economy.

Last year, the global focus for climate action doubled down on limiting temperature rise to 1.5 degrees. In 2022, it’s critical for Australia to step up.

Update April 5, 2022: The IPCC Sixth Assessment Report shows that limiting global warming to 1.5°C is possible. But it says ‘rapid and deep and in most cases immediate’ emission reductions are needed.

Australia has more reasons than many countries to take strong action on climate change. In this land of drought, heatwaves, fire, and floods, climate change further increases our vulnerability. On the upside, Australia is a land of opportunity – our access to sunshine and wind that can be harnessed is enviable. And the ancient and wide brown land where we live is also host to rich supplies of resources well-suited to an emerging global economy focussed on zero emissions. This means Australia has the potential to build green export industries worth more than twice the value of our current revenue from fossil fuel exports.

Australians have been using natural resources for generations, although for what and how has transitioned over years. It is time to transition once again. By taking practical, achievable and decisive action, Australia can contribute its fair share in limiting global warming below 1.5 degrees. But only if we act now.

During the last two years, the world has vocally shifted in its commitment to slashing global carbon emissions. And Australia has been compelled to respond – not just for the environmental imperative, but for the health of its trade, investment, and diplomatic relations. Part of that response included our Federal Government joining the states and territories in setting a net zero emissions target. This came just in time for November’s UN COP climate summit in Scotland. The Glasgow Climate Pact and the announcements preceding it marked an important step forward – but the proposed transition is not yet fast or far enough.

The next climate summit is in November of 2022. This will be when Australia – like all countries – is again asked to review its 2030 target. Finance and trade markets will not wait: the global transition has begun and Australian trade can only continue to shift its emphasis to zero emissions products. Without doubt, meeting expectations from our global community will be a central concern for whichever party is elected to govern federally this year.

At present, overall ambition to 2030 is a key point of difference between the two major parties at the federal level. However, some implementation ambitions – such as the development of new industries like green hydrogen – are broadly similar.

One of the most productive steps forward we could make this year would be an end to Australia’s divisive narratives around climate action. We can move past this and focus on strong community and business support to get Australia moving decisively and meaningfully on a path to net zero emissions. State and territory governments from across the political spectrum are setting ambitious 2030 targets and collaborating on the policies to achieve them. There is bipartisanship at state and territory level on climate, and this now appears within grasp federally.

But there is a lot more to do.

Our modelling shows that for 1.5 degrees, Australia must and can reduce its emissions by approximately 74 per cent by 2030 from 2005 levels, and reach net zero by the mid 2030s. This means that all levels of Australian government, businesses and the public must go ‘all-in’ on climate action this decade.

It is a significant – but by no means impossible – task.

As we step forward into 2022, the second year of the critical decade, here are some key moves Australia can make to catalyse climate action and ensure a strong, vibrant economy. 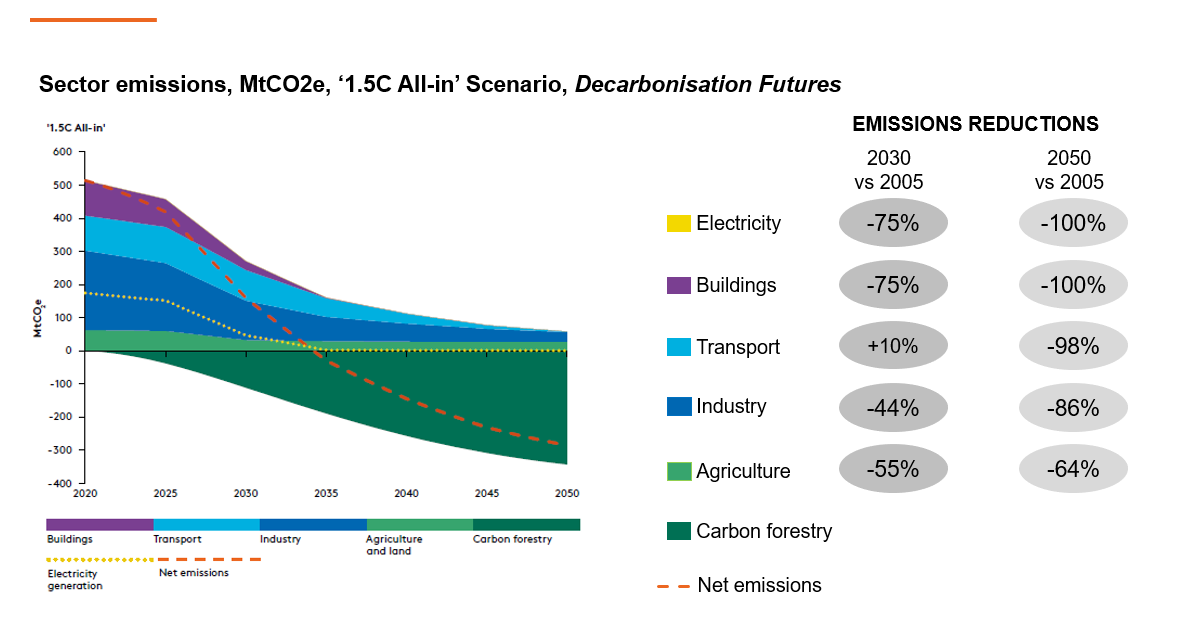 Plan for rapid change in the electricity sector

Central to achieving climate goals and ensuring thriving industries, will be the rapid transition to near zero emissions in the electricity sector. Over the last decade, the share of renewables in Australia’s generation mix tripled from 7 to over 20 per cent. And states and territories stepped up to keep momentum going when the federal Renewable Energy Target stopped being the lever for change.

In June, the Australian Energy Market Operator will finalise the next Integrated System Plan. The test will be whether this unlocks enough further investment in renewable generation and the infrastructure to use it efficiently. Fortunately, the Plan looks broadly on track – energy industry stakeholders view the most likely scenario for the National Electricity Market as one in which renewables meet 80 per cent of electricity demand by 2030. This is aligned to Climateworks’ modelling, which shows a path consistent with 1.5 degrees.

Even though electricity generation itself accounts for just a third of Australia’s total emissions, zero emissions electricity is the key to unlocking emissions reductions in all other sectors.

Accelerate emissions reductions across the economy

For industry, announcements on green hydrogen and switching to renewable energy came thick and fast in 2021. Governments at all levels are increasing investment in infrastructure, new technologies and skill development to ensure Australia develops these industries at scale. In 2022, Australia needs to go even harder, not just to reduce emissions but to capitalise on trade opportunities before other nations inevitably do so.

By the end of 2022, all states and territories need to be supporting industrial precincts powered by renewables and the development of regional clean industry roadmaps, as we are already seeing in Western Australia and New South Wales. These precincts will provide additional confidence about how to invest for the private sector and facilitate the switch to new zero emissions products that many markets need. The industry transition would also be supported by tightening the Safeguard Mechanism – the policy requiring Australia’s largest emitters to keep their emissions below a given limit. The policy will be reviewed this year under any government. Stakeholders, including industry, already know how it can be improved to incentivise change and support the transition to an industry fit for the emerging global net zero economy. Clear policy signals such as this will give the market confidence in the transition, and make way for innovative emissions reducing solutions.

In transport, Australia is falling behind the global curve on electric vehicles, despite states and territories introducing new targets and incentives in 2021 to drive uptake. In 2022, coordinated national efforts are needed to encourage Australians to act on their eagerness to switch to an EV. This includes increasing model availability and affordability for light vehicles, and accelerating research, demonstration and deployment of zero emissions freight vehicles.

Emissions from buildings will fall as electricity supply becomes cleaner and Australians continue their world-beating installation rates of solar panels. By the end of 2022, two things will be crucial to ensuring ‘future ready’ building stock: Firstly, that governments agree on strong energy performance standards for new homes in the 2022 National Construction Code. And secondly, an ambitious national agenda for buildings that goes beyond the Code. One with inclusions like phasing out fossil fuel gas use, and energy retrofits for existing buildings to ensure renters and vulnerable households aren’t trapped in inefficient, costly and unhealthy homes.

Finally, 2022 could see major steps forward for the land sector. Australia already has a reputation for quality agricultural products. With greater funding and coordination of solutions for agriculture emissions, premium markets will reward the sector by continuing to prefer our produce and goods.

The same will be true of supporting further development of carbon credits with high environmental integrity. Rewarding land managers for increasing nature-based carbon storage and other environmental services will deliver multiple benefits. For starters, negative land emissions are key to getting Australia to net zero emissions in line with 1.5 degrees. Doing so can also diversify regional income and keep communities viable.

All eyes will be on Australia at the next UN climate summit in Egypt this November. We have until then to raise our commitments to meaningful and achievable climate action in our country. There is ample justification for doing so. Australians recognise the moral imperative. We know we’re one of the countries most at-risk from increasingly extreme climate impacts. We know we have the resources and potential to thrive in the new low carbon economy. And the world has made it clear our global reputation and influence depend on how we act from here.

If Australia is to capture our unique opportunities while keeping 1.5 degrees in reach, we must act strongly in 2022.